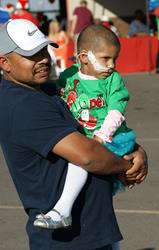 Victoria Gutierrez was only three years old when she entered the oncology world. On March 2, 2012 her mother and father took her to p.c.h. for a lung biopsy because she was failure to thrive and had many pulmonary issues.

That is when her doctor requested an MRI just to rule out any thing wrong. They found a malignant mass near her cerebellum. She was immediately admitted to picu and had a craniotomy scheduled for March 6, 2012.

She developed posterior fossa syndrome due to her tumor removal and had to undergo 7 rounds of chemo in a head start clinical trial. And was a candidate for a stem cell transplant. It was made possible September 14, 2012.

Victoria loves to be the center of attention. She has one brother who spoils her like crazy and three sisters who do anything and everything to make sure victorias days are filled with happiness and laughter. She has her father wrapped around her finger and mom taking care of her all the time. Victoria remains stable as of now and we continue to hope we remain there.