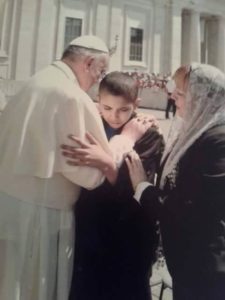 Sebastian was diagnosed with Osteosarcoma on his pelvis in April, 2013.  He has had lots of chemo and by the second year he was being treated with different medications.  He is in his third year now and is doing more chemo.  He is happy he hasn’t lost his appetitie and his favorite food is Italian food – pasta marinara.  He would love to travel to Rome, Italy again.  He asked to meet the Pope for his Make-A-Wish and was actually the first in the United States to do this.  During his meeting with the Pope he was blessed.  If he could say anything to his cancer it would be, “I’m not worried about you.”

Motto:  Love is the only force that is capable of transforming an enemy to a friend.