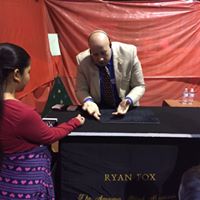 Ryan is 30 years old and was diagnosed as a child with Medulloblastoma.   He was the first in a new treatment and the 1st survivor and is glad to be alive!  He eventually lost his sight, a lot of his hearing, and had learning difficulties in school.  Ryan received a magic kit when he was in the hospital and never put it down.  He is now a professional magician and enjoys paying it forward to other children with cancer.  The most important person in his life is God.  God saved his life and blesses him everyday.  The things that make him smile and feel good are making people laugh, surprising them, playing drums in church, and performing magic.  He has learned that to overcome his disabilities he just makes them a different ability.  He has also learned to be positive and grateful for everything (even the bad)  because it teaches you something.  And love is big.  He would like to tell his cancer:  “I kicked your butt!”