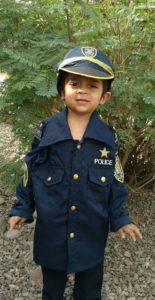 Lou is 3 years old and at 6 weeks old he was diagnosed with Juvenile Myelomonocitic Leukemia.  He received a bone marrow transplant at 6 months old with his sister Lily being his bone marrow donor and hero.  Since the day he became ill, Lou and Lily have been inseparable!  Lou is overall doing well but does deal with long term side effects from the chemo used for his transplant.  The most important people in his life is Jesus, his sister Lily, his cats and his doctor because they all saved his life.  He also likes the police because they protect everyone!  The things that makes him happy are playing baseball, going to Disneyland because he loves Mickey Mouse, and eating ice-cream!  Her has learned that he has the best doctors in the world and loves the “Heart Hand” (PCH).  He loves his family and his nurses, too!  He wants to tell his cancer that it is bad and to leave kids alone!!