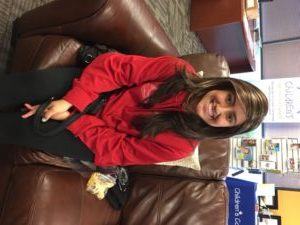 Lizette is a pretty 17 year old girl who loves to watch make-up tutorials.  She likes having her friends come over and talking to them helps when she is feeling down.  She has been diagnosed with Stage 2 Hodgkin’s Lymphoma.  It was just a few days after she had completed her senior pictures, that she was admitted into Phoenix Children’s Hospital.  It was very unexpected but her family has become more united because of it and it has also brought her closer to God.  The most important person in Lizette’s life is her Mom, because she is the one that stayed with her at the hospital.  She was the one who told her that no matter what the doctors said, we would beat the cancer and get through it as a family.  Lizette has learned that with love and support that her family and friends are giving her, it is making her stronger.  She would like to tell her cancer, “I will come out of this as a survivor and I am going to beat all odds!”