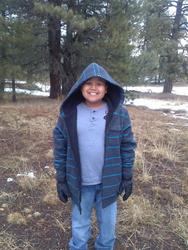 Our February 16 Run to Fight Superhero is Kevin! Kevin is a fun loving child who was diagnosed with leukemia in January of 2012. Kevin has a younger sister Aleena, and he says that she makes him strong, she always reminds him to keep going and never give up!

When people ask Kevin about his journey with cancer, all he talks about is the good things he has learned along his journey. Kevin is eagerly counting down the days until May 21st when his treatment will end! One of the highlights of his journey was his Make- A-Wish trip to see WWE superstar Kane, and another was going to camp with other kids who were traveling the same journey.

He enjoys the outdoors, his friends and family and playing video games. He is looking forward to seeing the movie Big Hero 6 soon. His favorite superhero is named Deadpool, and if he could have any superpower it would be to regenerate health.

Kevin comes across as a gentle giant. In his words, if he were an animal…he would be a coyote as they are very strong.