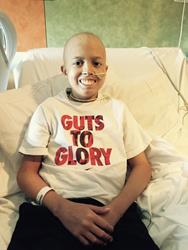 Julian is one tough young man; he keeps defying the odds and keeps the nurses and doctors at PCH on their toes. He has endured a tumor in his liver, a weakening heart that was barely functioning, and countless other obstacles over the past few months. Julian is a sweet, delightful young man with a smile that lights up the room and your heart. His favorite activity at school is P.E. He just can’t get enough of the running and exercise. Last Friday Julian attended the Diamondbacks game against the Dodgers who happen to be his favorite team! And guess what? Julian was called down to the field and received an autographed bat from the LA Dodgers! What a night for him! But it gets better! The next night he attended the game again and was down on the field in celebration of Childhood Cancer Awareness Day! His smile said it all! As for movies he loves Transformers! Julian loves Ironman because of his costume and the fact that he is as strong as iron! But if Julian could have any superpower if would be to invisible in order to bug his brothers and sisters without them knowing. Let’s hear it for our superhero Julian!!