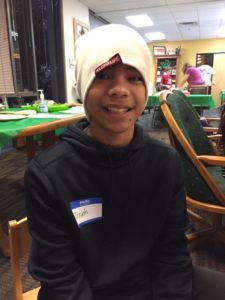 Josiah was diagnosed in January 2016 with brain cancer.  He is a cute 14 year old boy with a positive and uplifting attitude.  Through his cancer journey he has learned to slow down in life instead of doing everything at a fast pace.  Family is important to him because they take care of him and have watched over him during his journey.  He has learned who his true friends are that have stuck by him and helped him throughout his cancer journey.  He loves to run and used to run the 200, 400, and 800 in track.  He like to box and has a punching dummy at home to practice on.  He would like to tell his cancer, “You are WEAK CANCER!  The name cancer is a strong word to use but in reality cancer is weak!”