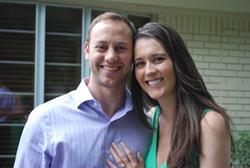 Josh, a resident at Phoenix Children’s Hospital, was diagnosed in 2001 with Osteosarcoma. He was 19 years old and had finished his freshman year of college just a few weeks before. He did not know anything about cancer and thought that after a few months of treatment he would be able to start attending school again like a normal student. Josh soon learned he was wrong. He had many complications from his treatment including bad side effects from the chemotherapy, severe infections, PICU stays and unplanned surgeries including a hemicolectomy and ileostomy. At one point Josh even spent 45 days in a row in the hospital. Josh explains that while this was very difficult he had great family, friends, doctors, nurses and child life specialists who helped him get through his treatment. Upon finishing treatment he was able to get healthy again, gain weight, start working and get back to living the life of a normal college student. Josh credits his close friends as giving him strength. They have been there with him since before he was diagnosed with cancer and recently were the best men in his wedding. He of course also states his family kept him strong! Josh says adults can have heroes and wish for superpowers just like kids! Therefore, if he could be a superhero it would be Wolverine because he and Josh probably have close to the same amount of metal in their bodies. Additionally, Josh wishes he could transport to anywhere, anytime. He could see so much more of the world and visit family and friends more often without having to worry about travel time. Josh loves soccer, golf and traveling to foreign countries Josh decided to become a doctor about 5 years after he had finished his cancer treatment. When he was finishing his treatment at age 20 his pediatric oncologist had told Josh he thought he should go into medicine and become a physician, but after being so sick and spending so much time in the hospital Josh never wanted to spend one second more in a hospital than he had to. So instead he went on to graduate college with a business degree and worked in marketing and sales for several years. However during college and his first few years in work he continued to work at camps for kids with cancer and blood disorders; as well as tell his story at different conferences and events, and even though he had no idea he wanted to be a doctor he knew he enjoyed being involved in the pediatric cancer community. Eventually, Josh realized that what he truly wanted to do in life was become a physician and treat, support and heal children who were going through the same difficult diagnosis that he had experienced years before. And we are so thrilled that that is what Josh is doing!