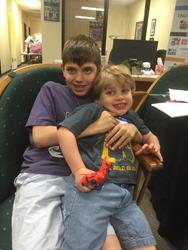 Our March 2 Run To Fight Superheroes are Ethan and Jackson!! 4 year old Jackson was diagnosed with Wilm’s tumor of the kidneyjust before his 2nd birthday. His treatment lasted one year and was completed one year ago. He and his family (and all of us) are hoping for clear scans in April!!

Jackson likes to swim, likes chocolate milk, and most of all loves his big brother, Ethan! 8 year old Ethan is also a Run To Fight Hero today! Ethan likes all the same things as his brother and loves legos. He is even going to Legoland to celebrate his upcoming 9th birthday! Ethan is an awesome big brother to Jackson! Please consider a donation to the CCN team for the Run to Fight Children’s Cancer on March 7!