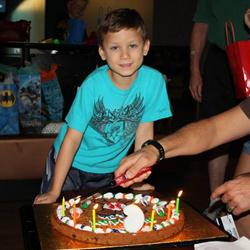 Seven year old Jack loves baseball, particularly the Diamondbacks and the Dodgers! A second grader at Ryan Elementary in Chandler, he is a super reader and enjoys video games and puzzles.

He is quite taken with magic at the moment and shared that he would like to become a magician! Diagnosed in September 2011 with Leukemia, he looks forward to finishing his treatment in January of 2015! He feels great during this phase of treatment though, so good in fact that he recently broke his leg while ATV’ing! The broken leg is a bummer, but at least its within the list of “normal” injuries! Heal quickly, Jack!!