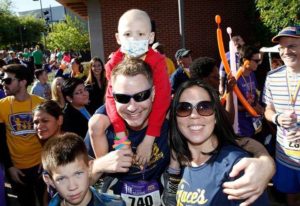 Jace is in Kindergarten this year and has 3 brothers.  He was diagnosed after he just turned 5 with ALL.  It was over Thanksgiving weekend that his mom and dad noticed bruises and the usually energetic Jace was fatigued.  That following Monday they took him to the doctor thinking it could possibly be Mono because one of his brothers had had it.  They left the office with a diagnosis of Leukemia and were told to go to the emergency room right away.  They were devastated and knew it was serious.  If Jace could talk to his cancer he would tell it “I’ll kick your butt, cancer!”  Jace loves all kinds of food, especially pasta and hard boiled eggs.  He loves to play sports but during treatment he had to stop.  He is now feeling better and is well enough that he has started playing soccer.  Hopefully this is a first step towards other sports he likes to play as well.  During treatment he was rewarded with Superhero stickers that he put on a chart.  Some treatments were worth more stickers than others and after he filled the chart he was able to choose a Lego set.  Building with Legos is something else he really enjoys.  Bosa donuts were also  a reward after clinic visits.  Jace has been chosen to be the 2017 Race Starter for the Run to Fight Children’s Cancer at Grand Canyon University.  His family has a team that they have created called, Jace’s Defenders, and are excited to be a part of the run.  The run is scheduled for Saturday, March 11, 2017.