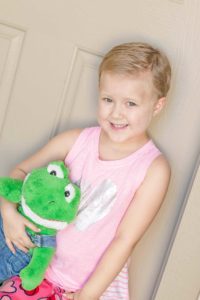 Gwen’s motto is “Cancer Sucks!”  She was a healthy girl up until she was diagnosed out of the blue in June of 2016.  Going to the doctor with a fever, it was decided that blood work needed to be done to figure out what was going on and Gwen was diagnosed with acute lymphoma leukemia – ALL  This diagnosis has not only changed Gwen but also it has changed family life as they knew it.  Now at age 5 (almost 6!) she already has dreams of becoming a marine biologist and saving animals.  She loves animals, particularly ocean animals.  It is on her bucket list to learn how to surf.  Her family has formed a team called Gwen’s Gladiators which consists of family and friends.  Together they participate in events to raise money for different organizations that are helping to fight childhood cancer.