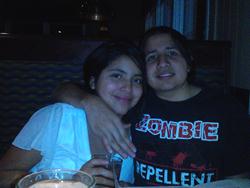 Gian is my hero because I remember when we where 10 and he was teaching me how to play video games or when we were watching sponge bob or teen titans. But I also remember the doctor visits and the MRI scans he and me having to grow up fast to understand what’s happening and when and why. I know we never had a completely normal childhood but it was fun. I want to thank him because he was always there for me when I needed some one to teach me something or to tell how I feel or just to play some games. he is my hero. Superman, Batman, Captain America no one compares because what he has been through is something awful but he always see the light at the end of the tunnel. he defies every thing that’s wants to do him bad and he gets and keep on going and accomplishes everything he put your mind to why because that’s who he is and that’s what he does. No matter what he some how had the courage to face the doctors at 4 radiation and chemo and now the tumor again 12 years later. He made it I know I couldn’t but he makes it seem like nothing and I know its hard for him. that’s 17 years of fighting. And its always been if he stands tall ill stand up right next to him, if he fights ill throw punches with him, if he believes, ill have faith .If he’s my hero ill be his sidekick. He’s the most important person in my life. that’s why he’s my hero.