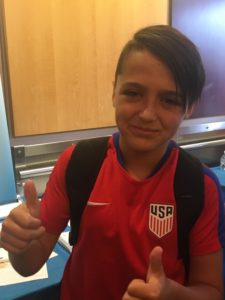 Cooper is an ambitious 13 year old who would like to someday climb to a high peak and to be able to say he did it!  He has beat his leukemia while living in the Phoenix area and is proud of that fact.  Since then he and his family have moved to California.  Coming back to go to Camp Sunrise in Prescott was important to him and that is what he did this summer for a week.  His superpower would be to fly because he wants to travel the world.  When he grows up he would like to be a pastor and to be able to save people who don’t know who God is.  He would like to tell other cancer survivors, “Trust the doctors, trust the medicine, and be your own person while you’re in the hospital.”