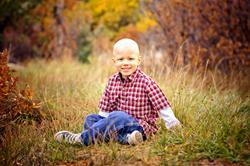 Conner is 4 with Ewings Sarcoma. Conner is an Air Force Military Child. Conner loves sports, his siblings & being a Wylie Bulldog. He loves going to the football games, watching his sister play soccer, & playing with his brother. Crusade: “Any vigorous, aggressive movement for the defense of a cause” Conner is a super sweet, often soft spoken, funny, 4 year old (turned 5 in July).

He says the funniest things, probably because his sister is 17 and brother is 19. Conner was very much our “miracle” baby to start with. My husband and I are High School sweethearts. We got married at 18, had first born at 21, second born at 23. We thought we were done, my husband had a “V”. Fast forward a few years and we didn’t feel “complete”. 10.5 years after the “V” my husband had a reversal. It was a success and within 2 months I was pregnant with Conner.

The “journey” started the day our household goods were being loaded in a moving truck for our PCS from Abilene, TX to Colorado Springs, CO. What started with a trip to the Urgent Care for possible pneumonia has turned into a journey that no one ever wants to walk down. On January 21st, 2013 Conner had a fever of 103.5, we took him into the urgent care and he was diagnosed with an Upper Respiratory Infection and given a 5 day Zpack. 6 Days later on 1/27 his tonsils looked “large” so we took him back to the urgent care where he was diagnosed with strep.

He was given Amoxicillan for 10 days. On 2/5 he finished his anti-biotics. On 2/8 the school nurse called and said he had a fever of 100.2, we then took him to urgent care again where the doctor wanted a chest X-ray to check for pneumonia. They found a large “mass” on his upper left lung. We were then sent to the ER at Abilene Regional Medical Center where Conner was later admitted.

Conner was put on IV Antibiotics and another Xray was taken the next day, when the Xray showed no shrinkage of the “mass” they ordered a CT scan for Monday 2/11. The CT scan the mass was not in his lung, but in his chest wall instead. Conner was careflighted to Cooks in Ft Worth that night. On Tuesday 2/12 Conner underwent surgery for what the surgeons called a “cystic” looking mass. After surgery the Dr’s told us it was a Small Round Blue Cell Tumor.

Pathology reports came back on 2/14 which diagnosed him with Ewings Sarcoma. A highly aggressive Bone Cancer. Conner’s tumor was in the soft tissue of the left upper chest wall. Since we were in the middle of a PCS to CO, we asked to be transferred immediately for further testing. We drove overnight to begin treatment in CO. We arrived at Children’s Colorado hospital on 2/15 for further testing – Bone Scan, Bone Marrow Aspirate, PET Scan, MRI all which indicated that his tumor was localized.

Conner’s surgery on 31 May went well and they got all of the tumor and good margins, he was declared NED (No Evidence of Disease on June 7th, 2013. Conner finished round 7 of chemo (VTC) on 6/21. Conner was scheduled to start round 8 on 7/1 but did not make counts and it has been pushed to 7/15 (IE). On 7/28 Conner made his first trip to the ER with a croup like cough (thankfully that is all it was).

6 month scans were done AWAKE (without sedation) and CLEAR! Conner’s only lasting side effects are the extreme sun sensitivity and the Neuropathy from the Vincristine. He will sometimes walk on his tippy toes and his feet and legs cramp up. His Orthopedic Surgeon says he already has mild scoliosis from the removal of his ribs.

These are things we can LIVE with… Very blessed! Update 9/24/14 – Conner still has the scoliosis, Neuropathy, & a slight hearing deficiency in the left ear. 9 month scans were NED!