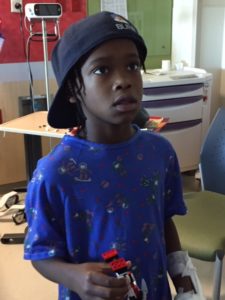 Derek is 7 years old and was diagnosed with Hepatoblastoma (liver cancer).  Finding out that Derek had cancer was very hard for his family because they didn’t know if he was going to live or die. He spent a lot of time in the hospital away from his family so now that he is home he enjoys spending as much time with them as he can.  He enjoys playing football, swimming, and playing on his I-Pad. Derek admires his dad because he has been there for him during all of his stages of treatment and surgeries.  After every surgery Derek would wake up like nothing had happened and tried to not let cancer change him but it also helped make him who he is today.  His motto is “Keep calm and fight on.”