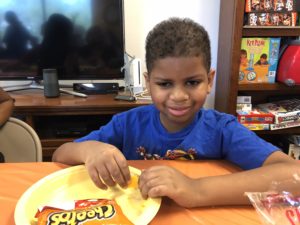 CCN’s September 7th Hero is Terrance!
Terrance was diagnosed with medulloblastoma in 2011. He has had quite a cancer journey with 3 brain surgeries, 3 bone marrow transplants, 7 years of chemotherapy, and 6 weeks of radiation! He has been cancer free since 2016!! He loves the Avengers and Captain America is his favorite because he has a shield and protects people. Terrance is special because he is a soldier! Brave! He has learned to do everything again from walking to talking and wants to do everything by himself. He loves Legos, Xbox, Wii, and playing games.