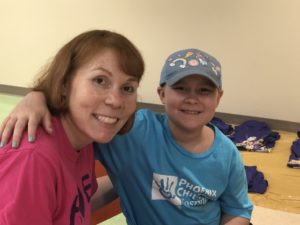 CCN’s September 24th Hero is Lila!
Lila was diagnosed with ALL in January 2018. She is 10 years old and had started feeling tired and not well. She ended up in a hospital in Canada and was then transferred, after 7 months into treatment, to Phoenix Children’s Hospital. She is being home schooled for now until she gets stronger and then she will go back to school. CCN will be going to her school with our HOPE re-entry program to help educate her classmates and peers about cancer. She loves the Disney character Rapunzel and watched it constantly when she was younger. He new favorite character is Gordon Ramsey because she loves to cook – especially stuffed shells! She is special because she is funny, understands everything her doctor says, is very mature, and she has a great smile!