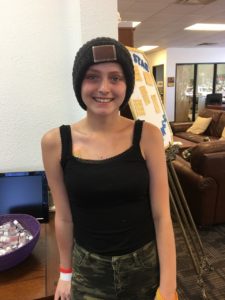 Serenity was diagnosed with ALP in May, 2019.  She is still finishing treatment but just found out that there is 0% cancer left!  Her cancer journey has been difficult but it has made her and her family stronger because they are fighting for something.  She is special because through all of this she has stayed happy!  She enjoys going to the river with her family and cliff jumping with her sisters.  She also enjoys going out to eat.  During treatment she met another patient whom she admires because she is a survivor of a rare ovarian cancer.  She looks up to this woman because she has given Serenity hope.  She would like to say to cancer, “I won!” and her motto is: “You can make it through anything if you put your mind to it!”  September 19th is Serenity’s birthday and she is turning 16!