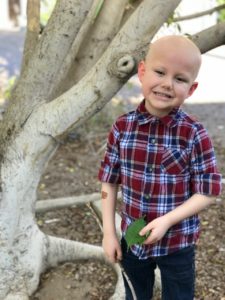 Davey was diagnosed with T-Cell Lymphoblastic Lymphoma on May 29th, 2019.  The doctors have said he is a miracle; he coded 4 times and came through!  He is cancer free and the tumor on his heart is all gone. He worries about what his friends and other people think about him with no hair and a port.  He is home-schooled and has decreased mobility.  His energy level is low and he is unable to wrestle with his dad and stays in bed a lot.  He really looks up to his Dad and “wants to be like his dad, except with more hair!”  Davey enjoys watching and creating You Tube video and wants to be a “You Tuber” when he gets older.  He is creative and like to play with Legos, Play Dough, and making things out of recyclables. Even though he has anxiety he has a positive outlook, smiling, laughing, being silly and telling jokes.  When he was told he was in remission he said, “I kicked cancer’s butt!”