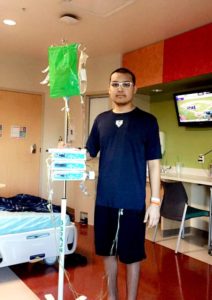 Jacob was diagnosed in March 2019 with B Cell Acute Lymphoblastic Leukemia one week before his 18th birthday.  It was during his spring break of his senior year in high school.  After diagnosis he was unable to go back to school but was still graduated with his class.  He has remained positive and his strength is unbelievable.  With his positive mindset and his way of keeping strong he has helped everyone else along the way.  Jacob loves the game of baseball and has played from tee ball up until high school, with collegiate baseball in his plans. His diagnosis changed his plans, and has caused a delay, but he is determined to still make it happen.