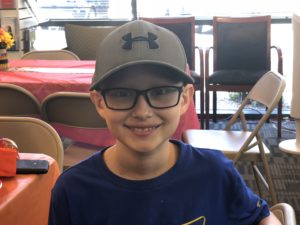 CCN’s September 13th Hero is Nathaniel!
Nathaniel is 11 years old and was diagnosed in November 2017 with Ewing’s Sarcoma. He has been hospitalized 4 times and has bounced back each time! His last treatment was Aug. 26th! His favorite characters are Spiderman and Batman! He has a dog named Harley and 2 cats named Kitty and Batman! He is special because he is mature, has a sense of responsibility and generosity. He is sensitive to others and said, “Glad he is the one that got cancer. He can fight more than a baby can.” Nathaniel likes to play basketball and video games.