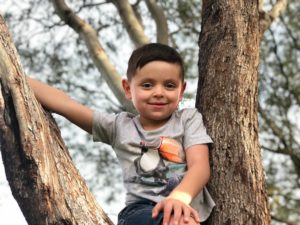 London was sick and it took the doctors a while to figure out the cause.  The family finally received his cancer diagnosis, which was a relief to finally have some answers, but it was also very difficult for the family.  He was diagnosed with LCH and was young enough that he doesn’t remember the treatment, but only knows he is a survivor.  He is happy and energetic.  Even through chemo he had a large amount of energy he was bouncing off the wall.  London, who is 6 years old now enjoys playing anything outdoors especially swimming –  which he will do any chance he gets!  He has fun playing with his siblings.  He admires a lot of people and all he wants is to be normal.  His motto is Never Give Up!