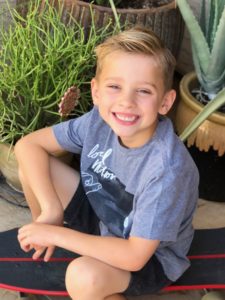 In January 2013, just shy of his 2nd birthday Jackson was diagnosed with Wilm’s tumor, a rare and aggressive form of kidney cancer. After help from lots of doctors, nurses and medicine (and the amazing support of family and friends) he got better! He is 7 now and will be celebrating 5 years CANCER FREE this October! His favorite food is pizza and he wants to be a Zoo Keeper when he grows up. Jackson loves to swim, draw, play baseball and hangout with his big brother Ethan. If he could travel anywhere it would be to Japan to see the Giant Panda. He and his family support Childhood Cancer Awareness so other kids can get better too – Superheroes Unite!