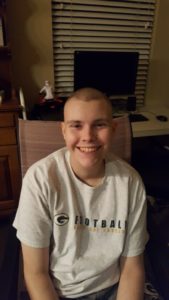 CCN’s March 7th Run to Fight Cancer Hero is Ashton!
Before being diagnosed with cancer Ashton was an athlete and a football player. In 2015 with sores on his foot and thigh he went to the doctor and was diagnosed with ALCL (blood cancer). CCN connected with the family 2 days after diagnosis providing an admission bag, and food and gas cards. After having surgery, 9 months later, he was told he was cancer free. Then the sores came back in other areas of his body in 2017. He began treatment again and needed a bone marrow transplant. His youngest brother was a match and was Ashton’s donor. Ashton is still in treatment and it has been a tough fight. He and his brothers have been in the CCN fashion show, adopted at holiday time, and have enjoyed the support in the clinic at PCH. His family hopes to be able to participate in the Run to Fight Children’s Cancer this year. To learn more information about  the Run to Fight Children’s Cancer go to runtofightcancer.com