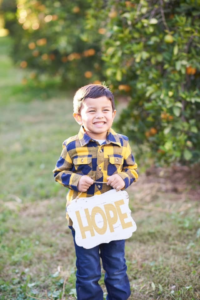 CCN’s March 5th Run to Fight Cancer Hero is JJ!
In September 2017, JJ went from a healthy happy three-year-old to throwing up, crying in pain, and not being able to walk almost overnight. We rushed him to the hospital, and doctors didn’t have any answers; perhaps a stomach bug or dehydration. After almost a week in the hospital, the answer was found and we heard the words that gutted our world, “it’s cancer.” He was diagnosed with LCH, a rare cancer that begins in the Langerhans cells. Our world stopped; suddenly life was in two phases – before and after cancer. JJ has struggled with terrible sickness, joint pain and headaches. At times he couldn’t walk; other moments he would just silently cry. Through it all, our hero has shown tremendous courage. For anyone who has spent any time with JJ knows, he lights up every room with his laugh, his witty jokes, and his love for life. His two best friends are his sisters, Serena and Stella. He joined his sister’s track team this year and he loves it! He throws the shot put and the javelin. Everyday when he gets home from school he asks “do I have track today?”! JJ finished his cancer treatments in December of 2018 and his little body has had a hard time bouncing back from all the chemo, steroids and other medicines. This past month he was diagnosed with a rare blood clotting disorder known as von Willebrand’s Disease (vWD), which is similar to hemophilia. JJ gets frequent bloody noses that can last for more than five hours. But he doesn’t let that stop him from being a happy, funny, loving little guy. He’s a cheerful fighter, an incredible kid, and a ray of hope in a sometimes dark world.
To register for the Run to Fight Children’s Cancer go to www.runtofightcancer.com