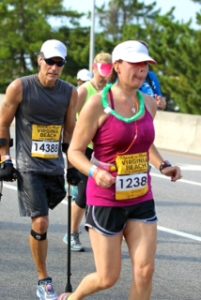 At the age of 7 Larry was diagnosed with a form of bone cancer, osteosarcoma.  This led to the amputation of his left leg.  The most difficult obstacle in his early years was that kids did not know how to react and said some mean things.  This got better as he was going through school and everyone matured.  Another obstacle was not being able to play team sports in junior high and high school which was frustrating to him.  He has a tremendous desire to succeed and realized he had to try a little harder than most people and he would not accept failure.  Because of this strong desire he was a member of the 1996 Paralympic team as a member of the sitting volleyball team.  He was also a torch bearer for the U.S. Olympics and holds the world record in the 10k, half marathon, and full marathon running on one leg using crutches.  His hope is that he wants to show other disabled individuals as well as able bodied individuals that you can still dream and dream big and achieve your goal.  Larry currently lives in Scottsdale with his wife and enjoys volunteering for non-profit organizations including a number of childhood cancer organizations.  To learn more information about the Run to Fight Children’s Cancer go to runtofightcancer.com