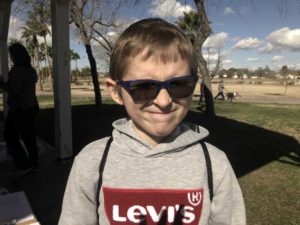 Noah is 10 years old and was diagnosed in July of 2017 with non Hodgkin’s lymphoma when they had discovered a lump under his arm.  He loves Star Wars, Pokemon, and playing video games.  Noah has a step brother and a step sister and lives with his mom.  Their motto is to Never Give Up!

The Run to Fight Children’s Cancer is March 16th.  www.runtofightcancer.com