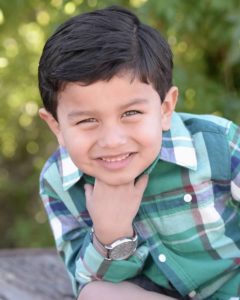 CCN’s March 14th Run to Fight Hero is JJ!
In late 2017, JJ was diagnosed with LCH, which is a rare form of childhood cancer. He is now in the maintenance stage of his treatment. Frequent and long lasting nose bleeds are one of the side effects from his treatment but he is an amazing and strong kiddo. He handles whatever life throws at him with humor and strength beyond his years. He likes helping his sisters build Legos and helping his mom cook dinner and his dad do laundry. He looks forward to a world without nose bleeds. Someday he would like to be a firefighter and ride in a helicopter putting out fires. He would like to run really fast like his sister. He wants his family to not worry so much and that he is pretty good at playing Mario while his nose is bleeding. The Run to Fight Children’s Cancer is on April 5th. To join in the run go to runtofightcancer.com.