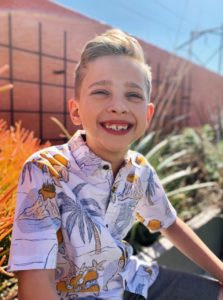 CCN’s March 11th Run to Fight Cancer Hero is Jackson!
In January 2013, Jackson was diagnosed with Stage 2, diffuse anaplastic Wilms’ tumor, a rare and aggressive form of kidney cancer. After help from lots of doctors, nurses, and medicine (and the amazing support of family and friends) he got better! This January he was 6 years cancer free! At 9 years old he looks forward to being a professional You-Tuber or Air Force pilot. When he grows up he would like to act like a kind and helpful person and he will be helping others to make their life better. Volunteering at the Colten Cowell Batcave with his dad and brother is something he likes to do for other people. It’s really fun because you get to ride in the Batmobile and Batcycle! Everybody is happy and smiling! His advice to his parents and family is to just try to be a better person. Jackson has a team for the Run to Fight Children’s Cancer called Action Jackson and Co. If you would like to form a team or learn more, visit runtofightcancer.com