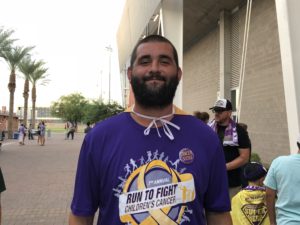 Robert was diagnosed with chronic myeloid leukemia when he was younger.  Today cancer still has an effect on his work life and daily activities because he is still going through cancer treatment.  The special people in his life include his mother who has been a big supporter throughout his cancer journey.  His sister has always been there for his and his girlfriend is always by his side.  His favorite place to go is Florida to go to Disney World.  He enjoys playing soccer and running because it is his life.  Something that makes him special is that he never gives up and never quits.  He wants to tell people battling cancer to never stop fighting!  Robert has participated in the past Run to Fight Children’s Cancer.

If you are interested in participating in the Run to Fight go to www.runtofightcancer.com