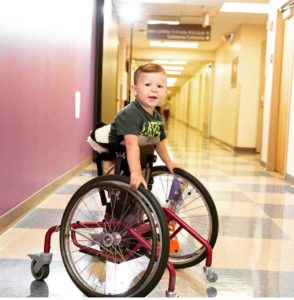 CCN’s February 26th Run to Fight Cancer Hero is Kendrick!
My son’s name is Kendrick, he is 2 1/2 years old. He was diagnosed with a myxoid soft tissue sarcoma at just 3 months old. We noticed at 3 months that Kendrick had stopped moving his legs and would cry sometimes when I would change his diaper, like it hurt his lower back. We went to PCH where they began to run tests. The next morning his MRI came back that he had a mass growing inside of his lower spinal cord. They went in for surgery to remove the tumor and we found out after two weeks and three biopsys later that Kendrick had cancer, and a very rare one at that (myxoid soft tissue sarcoma). Currently a newly prescribed medication has helped Kendrick’s tumor to stay stable over the last year! Kendrick has so much drive that has helped in his progression. He has movement down to his knees now and has been working on trying to stand and walk (with afo’s and assistance)! Kendrick is one of the happiest, smartest, and kind-hearted little boys. Most people look at him and have no idea of the fight he fights every day. He works so hard every day to be just like his big brother, Jax, and to do all the things that he does also. He is only 2 so he really doesn’t know what cancer is yet. He might tell people that he doesn’t like getting shots, but you do get a toy after. Kendrick is a boys, boy he loves Spiderman, motorcycles, fast cars, dinosaurs, and to draw. His favorite thing to draw is a spider. He has a motorcycle that he drives around the neighborhood. To learn more information about the Run to Fight Children’s Cancer go to runtofightcancer.com