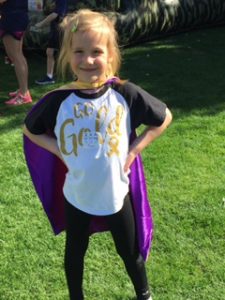 CCN’s February 25th Run to Fight Cancer Hero is Avery!
Avery loves to do crafts and sew. She was diagnosed with a rare sarcoma botryoides at 15 months of age. She underwent a year of chemotherapy, multiple blood transfusions, a half dozen surgeries, and countless scans. Now, at age 7, Avery is cancer free! When asked what Avery would say to someone who was scared or sick she would say, “Don’t worry, don’t feel bad, you can do it!” This is the 6th year Team Avery has participated in the Run to Fight Children’s Cancer. The team runs to celebrate Avery’s victory over cancer, and to support those still in the fight. To learn  more information about the Run to Fight Children’s Cancer go to runtofightcancer.com