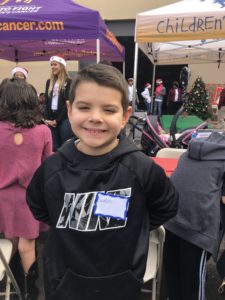 Aiden is 9 years old and has been diagnosed with neuroblastoma.  Because of cancer Aiden has missed a lot of school.  It became harder for him to read and after diagnosis he is dyslexic.  He enjoys toy dinosaurs, and board games like monopoly. His favorite sport is football, he likes going to the park and Urban Jungle is a place he enjoys going with his family and friends.  His best friend is his sister Cailin and he has a twin brother as well!

To volunteer or to register for the Run to Fight Children’s Cancer go to www.runtofightcancer.net

Run to Fight Children’s Cancer is on March 16th!