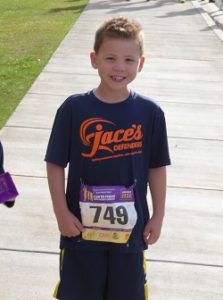 CCN’s February 22nd Run to Fight Cancer Hero is Jace!
Six year old Jace was the Honorary Race Starter for the Run to Fight Children’s Cancer on Saturday, March 11, 2017. Diagnosed just after Thanksgiving at the age of 5 years, Jace continues his three-year treatment plan for Acute Lymphoblastic Leukemia. Jace turns 7y in October and his passions are superheroes and baseball! To his parents, however, Jace’s cape-wearing idols pale in comparison to the real deal. “Jace is the real superhero,” says his dad. “He is an amazing young man.”To get more information about the Run to Fight Children’s Cancer go to runtofightcancer.com