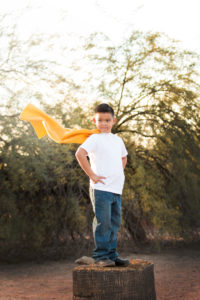 Damian was 5 years old when he started complaining of a stomach ache that did not seem to go away.  Cancer was not something his family ever imagined was the cause of his pain.  He had a large tumor growing in his stomach and it spread to other organs that caused him to have heavy breathing the night before he was taken to the hospital.  Because of the large tumor in his stomach, liquid was being pushed into his lungs, therefore, he needed chest tubes to drain the liquid.  In addition to the tumors in his body, cancer was also in his bone marrow.  Burkitts Lymphoma was his diagnosis, a fast spreading cancer that needed an aggressive treatment.  The next months would be spent in and out of Phoenix Children’s Hospital.  Week long stays for treatment and equal if not longer stays when he was sick after treatment.  Damian was in kindergarten when he was diagnosed and missed the last 4 month of school.  He was lucky enough to have his very own kindergarten teacher visit him in the hospital and at home, weekdays and weekends – this allowed him to keep up where he needed to be and also move on to 1st grade.  Damian is a very active boy who loves to be outside.  During treatment, he had to learn how to keep busy indoors.  Thankfully today, Damian is in recession and his port is also out!  It is a journey his family never expected to take.  His super hero is Spider-Man because he can do the splits and climb up walls and also to back handsprings.  He loves swimming and is absolutely head over heels over his new born little sister, Abigail.  There are three things Damian would tell someone if they just found out they have cancer:  You are strong and brave.  You are a hero.  Don’t be scared of the nurses and doctors, they will make you feel better!  To learn more information about Children’s Cancer Network visit our website at www.childrenscancernetwork.org and to get more information about the Run to Fight Children’s Cancer go to runtofightcancer.com