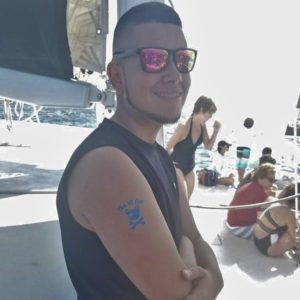 Mario was a football player in junior high school.  He began to feel fatigue in his knees and back and just thought it was from practice and playing.  At the age of 16 he was diagnosed with ALL (leukemia) through a blood test.  Throughout his treatments he lived at the Ronald McDonald House for a few months with his mom also spent 4 months in the hospital.  During his senior year, he relapsed and had a bone marrow transplant.  Today Mario is doing well.  Through Children’s Cancer Network he has been a recipient for a scholarship for 2 years in a row and he is currently in college studying to become a nurse.  He would love to work at Phoenix Children’s Hospital on the 7th floor with the pediatric cancer survivors.  He volunteers for CCN whenever he has the opportunity.  Mario loves sports, would like to travel the world, and would tell any newly diagnosed patient that with time everything gets better.  To find out more about the Run to Fight Children’s Cancer go to runtofightcancer.com