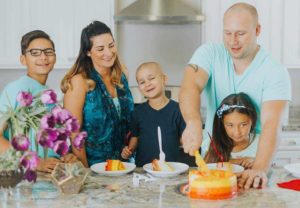 Bruce has wise words for other cancer survivors, “Don’t be afraid of your port!”  “It’s not really a big deal.”  These words are from a 7 year old who has been diagnosed with high risk ALL.  He was diagnosed in the fall of 2015 after having a fever that wouldn’t go away.  His family drives back and forth from Yuma to Phoenix for his treatments sometimes spending weeks in the hospital or coming in for regular weekly visits to the clinic.  In the last 2 years he has been able to attend school for only 3 months.  He has a photographic memory and this has helped him stay caught up in school but sometimes his mom wishes he didn’t see some of the things he has had to see.  Bruce was named after his Mom’s favorite villain, Batman!  He loves garbage trucks and how they work and wants to be a garbage man someday!  Bruce believes that the Lost City of Atlantis is a real place and hopes to visit someday.