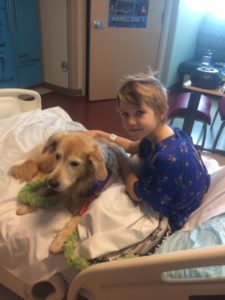 Ben was diagnosed with lymphoma B-cell and is 9 years old.  His cancer was discovered two weeks ago on Feb. 3rd through a biopsy.  After having surgery his family was told he was cancer free.   Driving home they received a phone call telling them that he still has cancer.  Who is the most important person in Ben’s life?  His whole family!  They are very close and Ben is the baby in the family so everyone babies him.  The things that makes Ben smile are pulling pranks (he is a jokester!)  He loves to laugh, do chemistry science experiments, and work on art.  He has learned that cancer is evil but has a lot of support.  He has high hopes to become cancer free.  He says “Cancer sucks!”