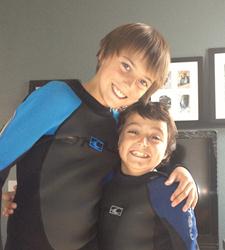 When Cooper was 8 years old he was diagnosed with Leukemia. Hearing that his brother had cancer tore Ben apart; Cooper was scared. Praying as a family, they asked God for His help.

Cooper had a port put in his chest, a central IV used for administering medication. He received tons of chemo which made his hair fall out and had to have LOTS of shots. Ben’s love for his brother is inspiring; he hated seeing Cooper in pain. He hated that Cooper was bullied at school and they had to change schools.

Being on the beach with their family is their favorite thing to do in the whole world. Both boys are adventurous enjoying soccer, basketball, body surfing and for Cooper, engaging in dirt bike riding takes his mind off everything. The health care professionals at the clinic have helped the boys cope with the changes that have come their way; helping them when they are scared or uncertain.

Inspirations come from each other as well as friends Kate and Caleb who are battling their own cancer. As Cooper, now 10 says, “I have one year left of treatment and I can’t wait to be done!!”