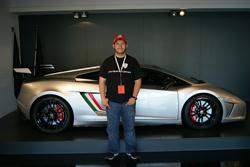 At the age of 16 years old, while Ashton went in for a routine physical for the upcoming football season, acute lymphoblastic leukemia was diagnosed. Ashton had no symptoms; he is almost done with his aggressive chemo protocol and will have his last dose on February 15, 2015!

None of this has slowed Ashton down; he is a junior at Arizona Christian University where he is majoring in biology and then going on to dental school to specialize in orthodontics. He is a well-rounded young man with interests extending to exotic cars, rare coins, gun collecting, playing the guitar, piano and traveling. Ashton’s faith in Jesus Christ is the foundation of his hope along with the support and prayers of family and friends.

Ashton’s Uncle Dwight provides the inspiration that he needs to move forward. As Ashton says, “my Uncle had diabetes since he was 4 years old, lost his sight at 35 and passed away 6 months before I was diagnosed. He is my example of living with a medical condition with grace and fullness. It is amazing to me to think that my hardship, cancer, is temporary while his lasted all his life.”

We were informed that Ashton’s Uncle Dwight actually passed away 6 months AFTER Ashton’s diagnosis. During those first 6 months, Ashton’s uncle helped him greatly in his journey! What an incredible inspiration for Ashton and we are sorry for the typo! Children’s Cancer Network certainly understands the importance of such a wonderful support system! Our best to Ashton and his family.